What is a skid steer and what's it used for? 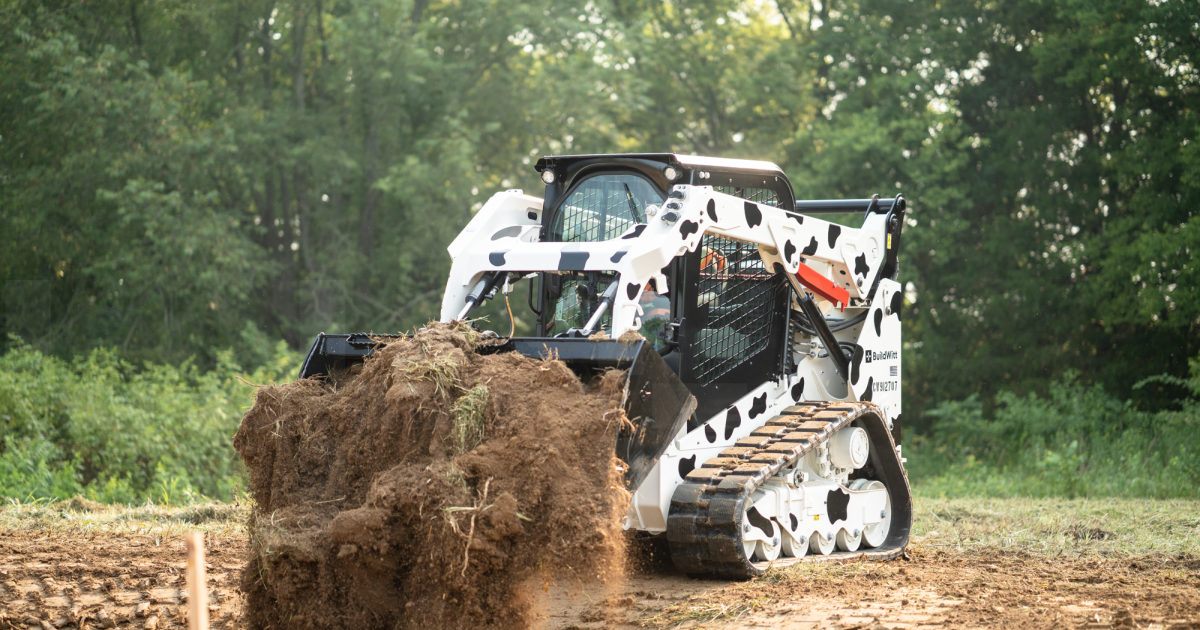 Need to move something heavy from a spot that's too narrow for most excavators? What about lifting a heavy pallet onto a truck? Have you ever needed to remove a stump that's plain in the way? These seemingly unrelated tasks—and more—can all be done with a trusty skid steer, otherwise known as a skid steer loader or compact track loader (CTL).

But what is a skid steer, exactly? A skid steer is a small but versatile piece of machinery primarily used for grading and moving material in the Dirt World. Still, it can perform a dynamic range of other tasks with the assistance of the hundreds of available attachments.

To learn more about this mighty little machine, let's look at how it works, the popular attachments available for skid steers, and some basics for skid steer operation.

What's a skid steer used for?

Skid steers pick up and haul material from one place to another. But the role a skid steer plays on the job site can vary depending on what the project requires. Sometimes, they dig or move material from a particular spot that's too narrow for a full-size excavator to reach. Sometimes, they're used for too small jobs for a larger machine to bother with. It’s like the Swiss army knife of the Dirt World.

The real magic of a skid steer is its versatility. With the proper attachment—and a skilled operator at the wheel—a skid steer or CTL can be used to:

That's a lot of jobs for such a small machine, but this range of purposes makes a skid steer an invaluable part of any Dirt World jobsite. It's also an invaluable piece of equipment to have if you're running a farm like our friend Jarryd McNeil, a 15-time X Games motocross medalist who loves heavy equipment.

What are the most common skid steer attachments?

What are the different types of skid steers?

Unlike excavators, skid steers don't come so much in multiple types as they do in multiple sizes, with one crucial distinction.

Skid steers come in two varieties: wheeled and tracked. The wheeled variety is less common—but more affordable. In addition to their price tag, wheeled machines move faster on smooth surfaces like asphalt, making them quicker to deploy from one job site to another.

Tracked versions offer a distinct advantage: In muddy or uneven terrain, their tracks make them more stable and less prone to slipping, sliding, or even flipping over. The tracks also present a downside: On larger, heavier skid steers, they tend to damage or even destroy surfaces like concrete or asphalt.

For jobs that require an even smaller footprint than that of a traditional skid steer or CTL, there’s the stand-on/walk-behind variety. Capable of fitting through the door of your home (and do donuts in the living room), these tiny powerhouses provide the same concept as their full-size cousins, with the ability to squeeze into tiny spaces. Demolition and landscape contractors often prefer these little guys for their lightweight and compact size.

There’s also an equally large variety of attachments for these machines, but they can’t share them with their larger counterparts since the platforms use different connection plates.

One step up from the stand-on is the mini skiddy (aka small skid steer). These super tiny skid steers can fit through doorways just like the smaller stand-ons, but they’re just a bit more capable in terms of travel speed and carrying capacity. There aren’t many manufacturers building machines of this size since they’re not super popular. But pool contractors, landscaper companies, and some demolition companies (like Milburn Demolition) love these things because they’ll go anywhere and are easy to use.

One of the most common sizes of skid steers and compact track loaders is the medium-frame class. While there are several types, models, and weights of machines that fit in this category, believe it or not, most of them use the same engine and frame within their class. These machines are preferred by, well, everyone. As we said, they're super common. And for a good reason. They’re well equipped to handle anything from loading trucks, grading yards, miles of trenching, and anything in between. And in the right hands, they won’t do any serious damage to pavement surfaces.

The real big boys. Large-frame skid steers and track loaders.  These tiny giants are capable of operating weights up to 16,000 lbs (the same weight as a small dozer). They’re favored among forestry, paving, and grading contractors for their ability to handle attachments that require high-flow hydraulics and pick up super heavy loads. While they can be excellent for specific tasks, their most significant drawback is how big they are. You certainly won’t be fitting these beasts through your door anytime soon…unless you don’t particularly care for the door.

How do you operate a skid steer?

Like virtually any machine found in the Dirt World, successfully using a skid steer takes skill and practice. But skid steers come with an added degree of difficulty that might throw a novice operator off their game. That's because the wheels on a skid steer don't turn. Instead, they operate by differential steering, in which the left and right pairs of wheels turn at different speeds—but that's just the beginning.1

Unlike cars, trucks, or most other construction vehicles, skid steers are piloted not by a steering wheel but by a pair of joysticks. Each uses hydraulic pressure to move different components of the machine. The left stick controls the direction of the machine, while the right controls the loader or attachment.

There's also a throttle pedal, which will be familiar to anyone with a driver's license, but there's a twist here: The throttle pedal also controls the speed of the loader's arms which means the machine needs to be at full throttle while being operated. Not to worry, though. The direction control is hydrostatic, similar to your garden tractor in the shed. So you won't go crashing into a wall like you would if your car was at full throttle.

Of course, that's far from an exhaustive overview. There's much more to learn, and additionally, BuildWitt Training has a lesson specific to skid steer walkarounds and safety.

How much does a skid steer weigh?

Skid steer weight will vary by type and brand, but a skid steer generally will weigh 1,500 pounds for the smallest varieties and up to 16,000 pounds for some of the largest.2 Most land somewhere around 9,000 pounds.

How much does a skid steer cost?

Like weight, cost varies by type, size, and manufacturer. Smaller skid steers can cost around $35,000-$40,000 brand new, and the largest easily eclipse the $100,000 mark. Of course, the used market could be your friend, and used skid steers are available in good condition for a fraction of the retail price.

How much does it cost to rent a skid steer?

Again, the cost of renting depends on size, manufacturer, and geographic location. Daily rentals range from $300 and up for small skid steers, while weekly rentals exceed $1,000. Your best bet is to call your local rental location and inquire directly about larger or more specialized machines.

How much can a skid steer lift?

Most common skid steers can lift between 1,200 to 2,700 pounds.3 The largest machines boast an operating capacity of 4,200 pounds, though.4 In other words, it's best to know what your project will require before buying or renting.

How many yards can a skid steer bucket hold?

How wide is a skid steer bucket?

The answer depends on how wide you want it to be and what kind of machine you intend to put it on. Typical buckets range from 62 to 82 inches wide, but wider buckets can exceed 100 inches. A good rule of thumb: make sure your bucket is as least as wide as the outside width of your tires or tracks—but go too wide, and you risk tipping or flipping your skid steer!7

Learn more about the Dirt World.

The Dirt World is full of exciting machines, both large and small. If you'd like to learn more about skid steers and other aspects of the Dirt World, including industry news, expert insights, and best practices from the experts, download the BuildWitt app today.

Ryan Galloway is the founder of a small, Brooklyn-based content and creative agency providing boutique services to a select group of corporate clients. The 18|Orion team has worked with some of the biggest brands in finance, media, and technology. They have grown audiences, driven engagement, and increased brand awareness and affinity. They're experts in how to merge data, storytelling, and service to deliver on ROI.